Forbes 2017 Billionaires list is here and Microsoft co-founder, Bill Gates has an estimated wealth of $86 billions, leads the list of world’s richest man .

Forbes is a well known American Magazine and every year rolls out a list Billionaires of the world. It has released 2017 Billionaires list on March 20. To our surprise, the list had some new names and surpassing all the previous records.

Microsoft CEO Bill Gates Is World’s Richest Man Again with the fortune of $86 billion, up from $75 billion last year. Bill has now won the title for the fourth time in consecutive years. But, this year Facebook’s founder Mark Zuckerberg makes the list,  who is youngest amongst all the top 10 billionaires aged just 32.

The Forbes list consists a total number of 2,043 billionaires with a total net worth of $7.67 trillion. Americans dominate the top 10 billionaires in the list. 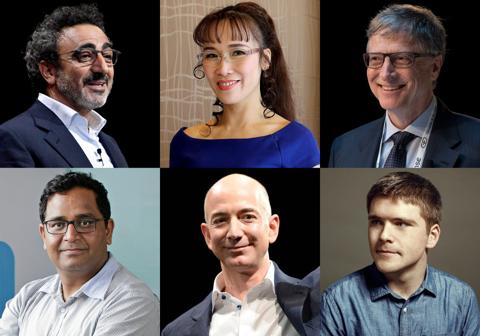 Facebook founder Mark Zuckerberg moved up to number five for the first time after his fortune rose $11.4 billion in 12 months. Meanwhile,Carlos Slim Helu of Mexico, once the world’s richest man, fell to number six, the first time he’s been out of the top five in a dozen years.  Donald Trump on the other had lost his popularity and was ranked 544th.

Seventy-eight people fell off the list, including 33 from China, 7 Americans and 9 who are still super wealthy but share their wealth among extended family members and therefore are not eligible for these ranks. Additionally, 20 billionaires died in the past year, including Enterprise car rental founder Jack Taylor and Michael Ilitch, who launched Little Caesar’s pizza with his wife, Marian.

You can yourself see the complete list of the Billionaires from here.