Windows 10 Creators Update: Everything you need to know

If you clean install Windows 10 Creators Update or simply purchase a new PC with Windows 10 preinstalled then you’ll notice Cortana shows up to guide you through the setup process. Cortana will use your microphone and speakers to listen to commands, including setting up a Wi-Fi network and keyboard layout.
It’s a neat addition, but you can always use your keyboard and mouse instead of your voice if you want to set up Windows 10 in a more traditional manner. Either way, the entire process of setting up Windows 10 has been greatly simplified, especially if you compare it to how long and complicated it took to get a Windows Vista machine ready just 10 years ago.

Microsoft is focusing on improving the gaming experience in Windows 10 Creators Update. A new Game Mode in the Xbox app will prioritize CPU and GPU resources for a game. It’s designed to reduce background tasks and other apps from hogging all the system resources, and ultimately make sure that games run as best as they can on a Windows 10 PC. 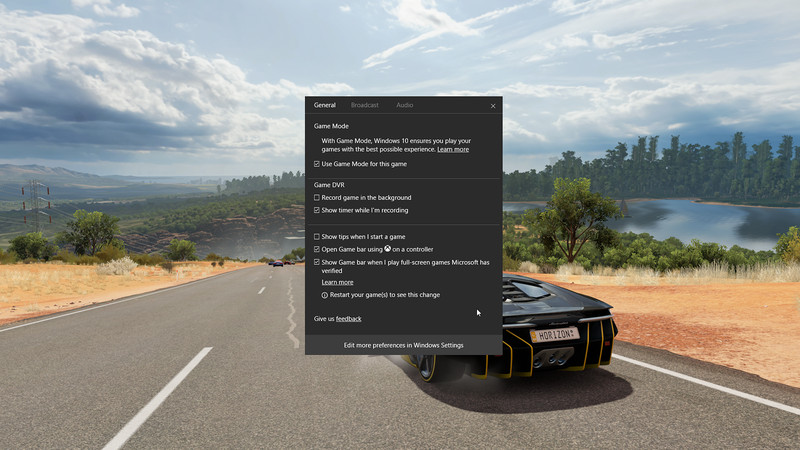 New Game Mode feature in Windows 10.
Microsoft has also added Beam streaming (similar to Twitch) to the Xbox app for Windows 10, so all users have the ability to stream their gaming sessions to friends. Game Mode will need to be enabled on a game-by-game basis, but publishers should be able to enable it automatically in the future. Game Mode is enabled by default in Windows 10 Creators Update.

Microsoft is adding picture-in-picture support to its Universal Windows Apps. The built-in Movies & TV app allows you to watch a film or TV show and pop the window out so it’s always on top, and Skype will place calls above other windows. It’s similar to features on iOS or Android, and you can keep watching content while you browse or work in other apps. Only some of Microsoft's own apps support picture-in-picture right now, but all developers will be able to include the feature in-app updates. 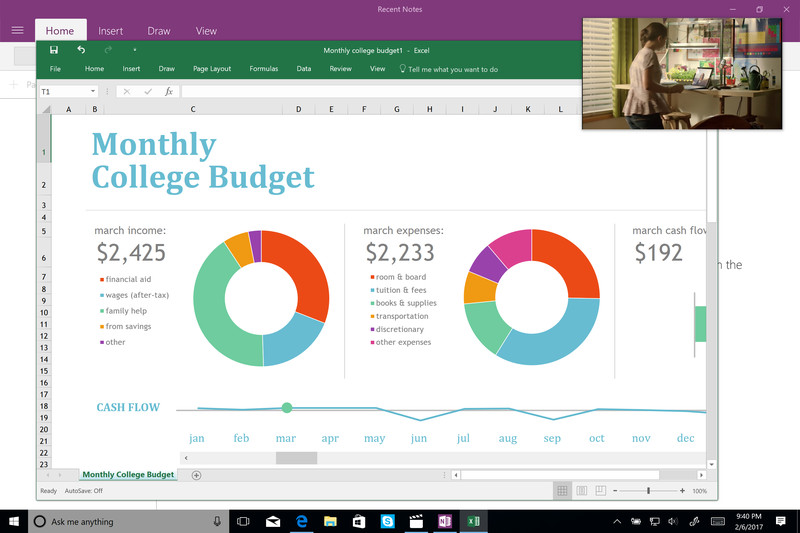 Microsoft has built its own version of F.lux into Windows 10 with the Creators Update. Dubbed Night Light, you can allow Windows 10 to reduce blue light from a screen after sunset or at a specific time in the evening. It’s much like what’s already available on iOS, MacOS, and Android, but at least you don’t need a third-party app to enable this on Windows anymore.

Dynamic Lock is a new Windows 10 feature that’s designed to be the opposite of Windows Hello. Known internally at Microsoft as “Windows Goodbye,” Dynamic Lock lets you automatically lock a Windows 10 PC when you’re away from it. You can pair Bluetooth devices like a phone or wearable, and Windows 10 will sense once the Bluetooth connection is too far away and lock the PC.

Microsoft’s Creators Update for Windows 10 is designed with 3D in mind. Although there aren’t many creative features in the OS update generally, Paint 3D is the obvious addition. As the name suggests, it’s a 3D version of Microsoft’s built-in Paint app, and it’s totally rebuilt and modern. You can build 3D objects in Paint 3D or import ones created by community members from Remix 3D. 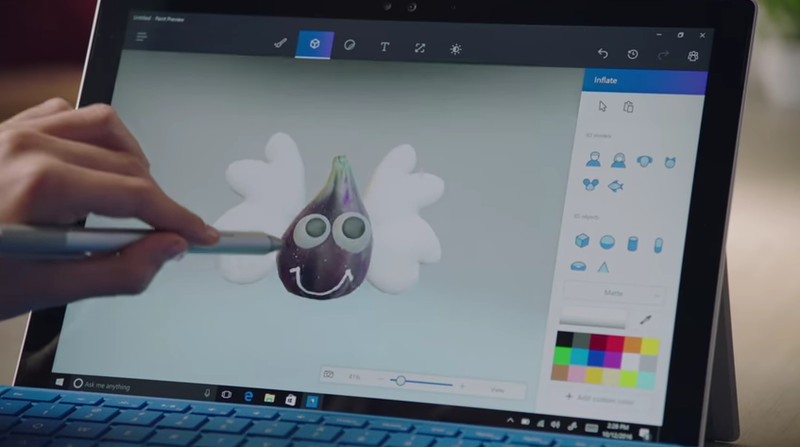 Paint 3D.
It’s also a lot more touch-friendly than the regular Paint app, and you can use a stylus like the Surface Pen to annotate and create objects. Once you’re finished with a Paint 3D creation, it can easily be shared to the Remix 3D site or even used on a Windows Mixed Reality headset or HoloLens.

Although it’s not strictly a Windows 10 Creators Update feature, Microsoft has updated its Photos app recently to support inking. It’s a much-needed addition that lets you pick a photo and annotate it and share it easily via email or social networks. Unfortunately, inking in Windows 10 Creators Update still isn’t everywhere. Even in apps like the built-in email client, you can’t simply jot notes down inside an email or annotate an attached image. Microsoft has a long way to go to bring inking to the center of Windows 10, but features like inking in the Photos app and Windows Ink are a sign it might eventually happen.

One surprising addition to the Windows 10 Creators Update is the fact that Windows Hello gets faster. Microsoft has improved the recognition process for facial scanning, and the new setup process shows you exactly how Windows Hello scans your face to detect who you are. The result is a much speedier Windows Hello login process.

Microsoft is tweaking its Edge browser with the Creators Update. A new feature lets you set tabs aside and save them for use later on. It’s essentially a method to save a snapshot of your current browser window. If you’re a heavy user of tabs then it’s a welcome feature, but for everyone else, the new buttons that enable the feature are likely to be confusing.

Set tabs aside in Microsoft Edge.
Microsoft is also adding ebook support and the ability to view 360 videos to Edge. You can download and purchase ebooks through the Windows Store, and sample 360 videos are available in the Movies & TV app.

One of the smaller changes in Windows 10 Creators Update will have a big impact for those wishing to better control updates. You can now pause updates for a week, or configure active hours in Windows 10 for up to 18 hours a day. This should reduce complaints about Windows 10 automatically rebooting machines for updates, and provide the ability for users to control them better.
Microsoft is also tweaking its privacy controls in Windows 10 Creators Update. You’ll be prompted to review and configure features like diagnostics, speech recognition, location, and relevant ads. It's part of Microsoft attempts to be more transparent, and a response to some widespread criticism over Windows 10’s privacy controls.
Overall, the Creators Update doesn't have a lot in it and isn't nearly as comprehensive as last year's Anniversary Update. Microsoft has another major update planned for later this year, which should include a lot of notable new features and design improvements.
So what do you think about this update and if you have tried it do comment below and let us know about this.
Via: The Verge

Tinder now has more than 1 million Plus...

Samsung S8 to come with A.I based Virtua...